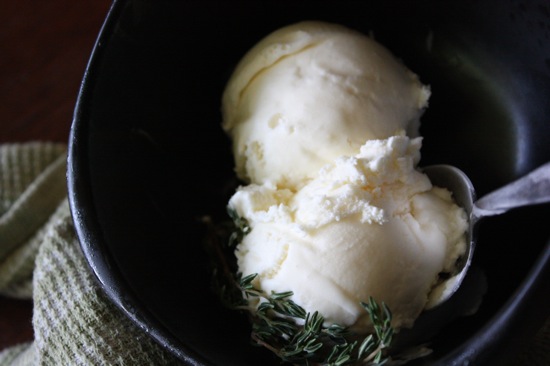 Seems crazy, don't it? Well, a few winters ago I tried some ice cream at a potluck.  It was supposed to be pistachio ice cream, though you wouldn't have noticed because of the added thyme.  Let me tell you, it was the best ice cream I have ever had. I tend to speak in hyperbole, but I'm not exaggerating here. It was creamy, rich and had a hint of that unpretentious herb. It is such a delicious idea.

So Dave and I made some thyme ice cream last summer hoping it would turn out as well.  I think it did.  I tried it again this summer but decided to throw in a bit of honey. The earthy thyme combines with the nutty honey flavor to make it a seriously addictive ice cream.  Plus, it's Philadelphia-style which means not having to deal with a complicated custard.

"Sprig" is a pretty vague term. I always thought of it as just one stem with leaves, but no extra branches.   I went to the store and the thyme there was much bushier than what I used, which would explain why my batch could have used more of a flavor boost. So I guess a sprig can also mean a stem with branches.  I would shoot for 4 really bushy springs or 8 to 10 individual stems.  Also, once you've steeped the cream mixture, you can taste it and if it's not thyme-y enough, steep it for a bit longer.


Don't skimp on the vanilla! The alcohol in the extract helps to make a smoother ice cream since it doesn't freeze as solid as the cream.

In a heavy medium-sized saucepan, combine the cream, milk, sugar, honey, salt and thyme sprigs. Warm cream mixture on medium heat, stirring regularly with a wooden spoon.  Heat until foam appears around the inside edges of the pot and the mixture is steaming but not quite boiling, about 10 minutes. Remove from heat, cover and steep for 20 minutes. 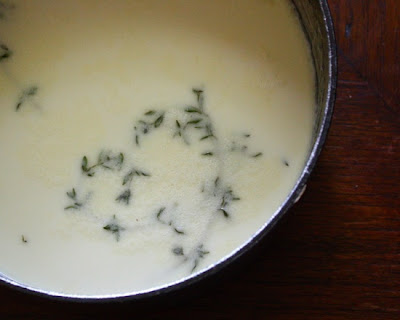