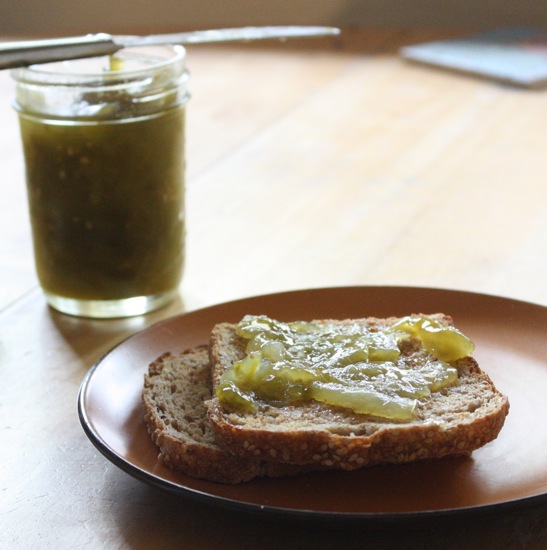 Long time, no blog. I pretty much had to dust off my computer to get this post going. With Dave moving here, studying for the GRE, and applying to graduate school, I seem to have only a few moments of freedom each day.  It's nice to be this busy, but I wish I had more time to dedicate to cooking and blogging.  I think I need to accept that one post a month is a realistic goal until January.  However, I'll certainly try to make the few posts that I publish worth everyone's time.

It looks like my blog neglect hasn't been too detrimental, because gardeners in the NW still have green tomatoes.  It's a relief because Montana is quite a different story. I made this recipe a month ago when I was visiting my parents in Helena.  The day I got up there, they were breaking down their garden for the winter after they had been hit with a few freezing nights.  They had tons of green tomatoes at their disposal, and I was determined to use them up in some interesting fashion. Though I'd never tried it, I'd heard that tomato jam was a tasty treat.  I figured that green tomato jam would be just as interesting and a simple way to use up the unripe fruit. 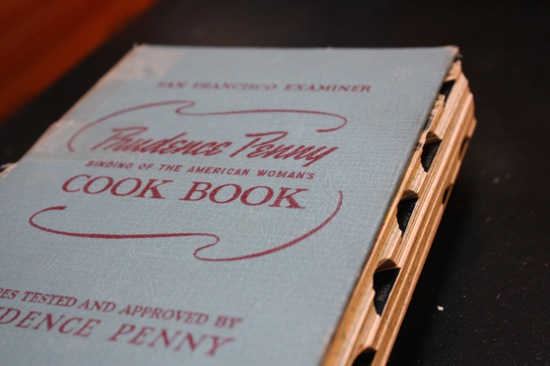 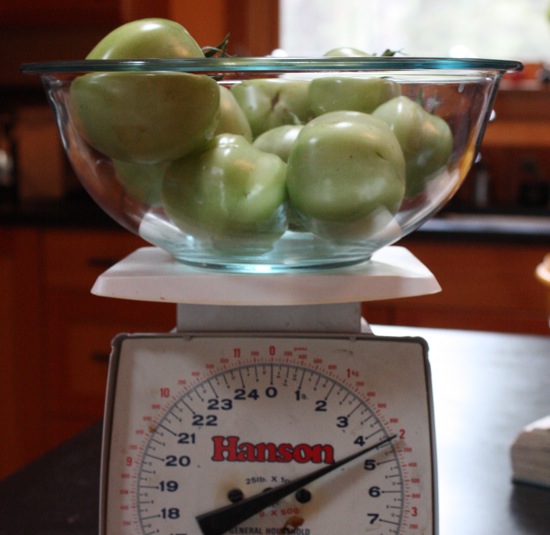 My mom decided to search in her 60-year-old cookbook, Prudence Penny: Binding of The American Women's Cook Book, to see if there was a green tomato recipe.  Voila! Green Tomato Jam was smack dab in the jam section.  I've found that older recipes tend to be brief in description, and this particular jam recipe was no exception.  It's refreshing to see such a simple recipe, where one is expected to have a base knowledge and the confidence to tackle a project with little direction. My mom and I found it to be very easy and straightforward, despite it's spartan directions.  The only annoyance with the recipe is that the mixture has to sit overnight to draw out the liquids.  But in the end, it only requires a little bit of planning ahead. 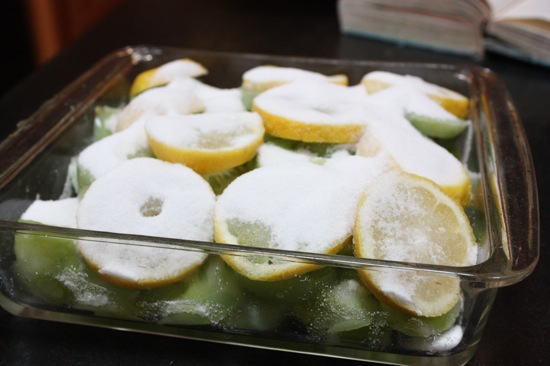 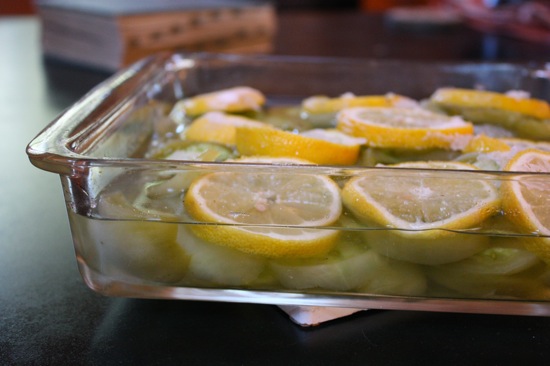 The original recipe called for adding preserved ginger to the tomato mixture.  I decided to go sans any added spices or flavoring the first time because I wanted to see how the tomatoes would stand up on their own. The final product reminded me very much of marmalade.  Tangy and sour with some real substance, unlike most jams. I think one could easily throw in a piece of orange peel to the liquid before boiling to give it a real marmalade-like flavor.  I also love sweetened thyme, so I'd probably try throwing in a sprig next time I make a batch.  Or maybe I'll try another fresh herb like oregano. 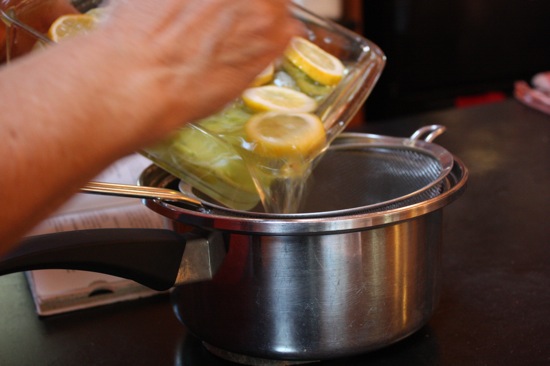 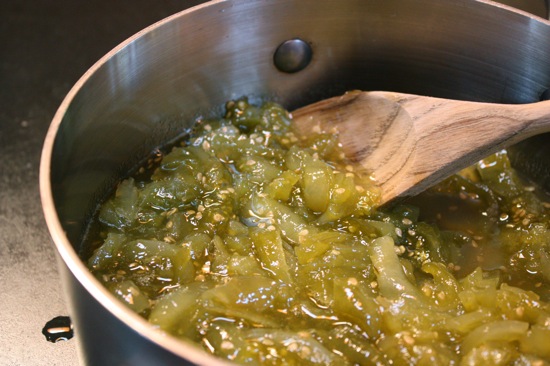 Old-Fashioned Green Tomato Jam
makes one pint, but can easily be doubled or tripled

Fill a large pot with water and bring to a boil. Remove from heat.  Place the whole tomatos into the boiled water, cover, and let sit for 5 minutes.  Drain water.

Cut each tomato in quarters and slice thinly, about a 1/4 of an inch. Layer in a medium-sized casserole dish. Thinly slice the lemons.    Layer lemon slices onto tomatoes.  Sprinkle with the sugar. Cover with foil or plastic wrap and let sit overnight, or at least 8 hours.

The next day, the layered tomato mixture should be sitting in liquid.  Place a sieve over a medium-sized pot.  Drain the tomato mixture liquid into the pot. Boil the liquid for 10 minutes, or until slightly thickened.   Remove the lemon slices from the tomato mixture.  Add tomatoes to the syrup in the pot.  Rapidly boil mixture on medium-high heat until liquid is clear and tomatoes are translucent, about 20 to 25 minutes.

Pour mixture into a pint-sized jar, or two half-pint jars.  Keep in fridge for many months. 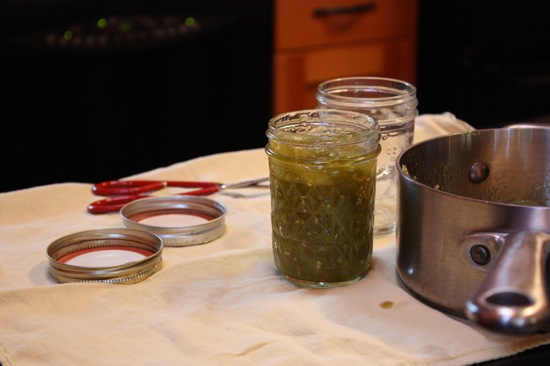 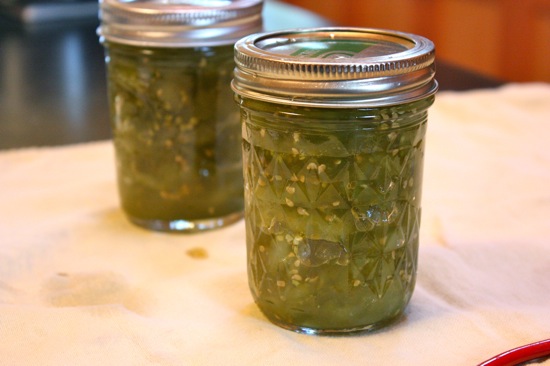 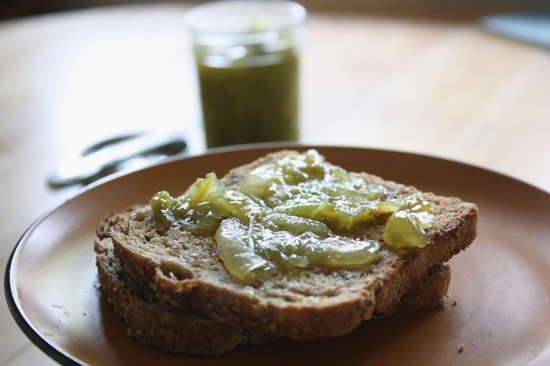