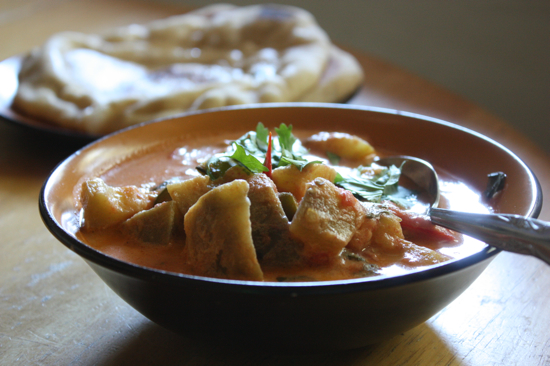 Over the past couple years, I have been on a hiatus from eating eggplant due to overconsumption. During a pseudo-vegetarian phase in high school, I discovered grilled eggplant sandwiches, ate them religiously, and found as many other ways I could to add eggplant into my daily meals. I couldn't get enough of it. And then I did. It seems to be a trend of mine to get sick of a certain food and to subsequently take a long break from it. Anyway, I am fairly certain that I am done with my eggplant-free phase. To celebrate, I made an Indian-inspired stew which ended up a nice change from the typical grilled meats and cold salads of the summer season. 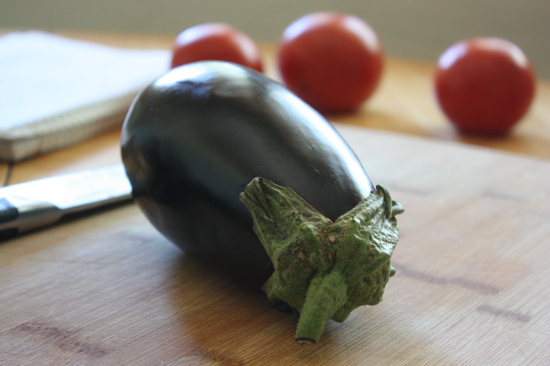 One of the most helpful and delightful cookbooks I own is Tender by Nigel Slater.  The book is divided by vegetable and describes the basics to seasoning and cooking along with a handful of simple, succulent recipes for each vegetable. I like his philosophy of cooking, and I always find myself salivating when I read through his recipes. My next cookbook purchase will be the second volume of Tender, which is about fruit.

At first glance, I thought this recipe looked too simple. The only seasoning is a garlic, ginger, and lemon paste that is added in the middle of the cooking process. Yet, it ended up tasting very flavorful and bright. It is a fairly spicy dish, but the yogurt helps to manage and distribute the heat. It went really well with some fresh, buttery naan, though I think chapati or rice would also work well. 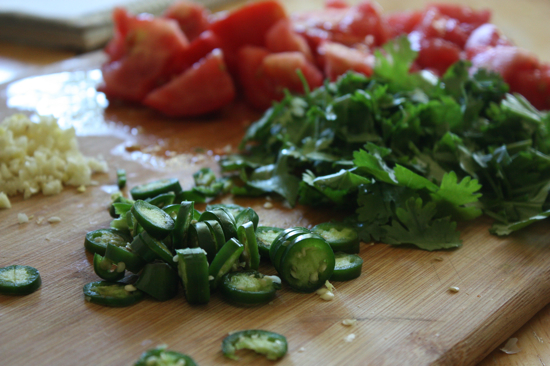 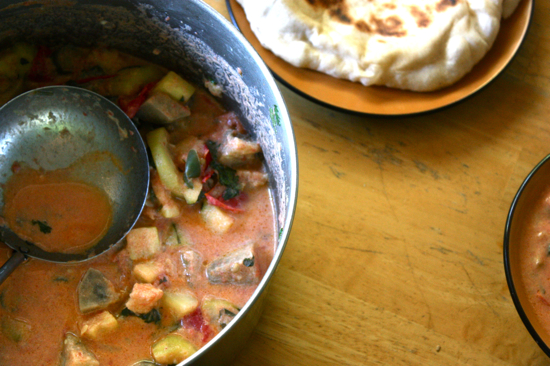 This recipe calls for the eggplant to sit in a colander with salt for a period of time, which serves to remove the bitterness. This step is not essential but recommended. It will take about 30 minutes, but I found that I was able to let the eggplant and salt sit in the colander while I comfortably prepared the rest of the ingredients.

naan (see recipe below), rice, or chapati for serving

Chop off the top and bottom of the eggplant and peel off skin. Cut into larger bite-sized cubes. Place in a colander and sprinkle with 1 to 2 teaspoons of sea salt. Gently toss to coat with the salt. Let sit for about 30 minutes. Rinse and pat dry with a towel.

Meanwhile, prepare the ginger and garlic. Combine with the juice of the lemon in a blender or small food processor. Blend until a thin paste forms. Set aside.

Coarsely chop the tomatoes and very thinly slice the serranos. Do not remove the seeds. Chop the cilantro.

After rinsing and patting dry the eggplant, heat the oil in a large pot on medium heat. When quite hot, add the eggplant pieces. Fry, stirring occasionally, until golden brown and almost tender, about 10 minutes.

Add the lemon paste. Stir to combine. Add the tomatoes and chiles and let cook for a few seconds. Add the cilantro and the 1/4 cup water. Season with salt and simmer on medium-low for about 5 minutes, or until the eggplant is just tender.

Gently stir in the yogurt. Simmer for about 8 minutes, or until flavors are well-blended. Serve with warm naan, rice, or chapati. 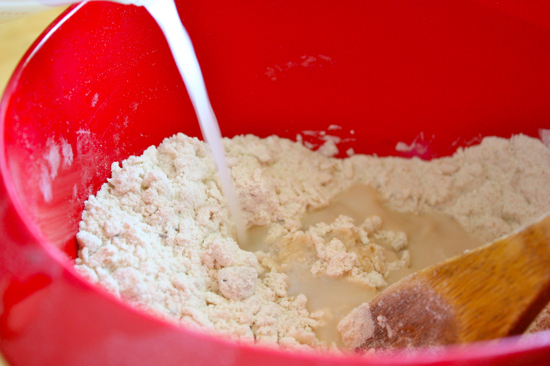 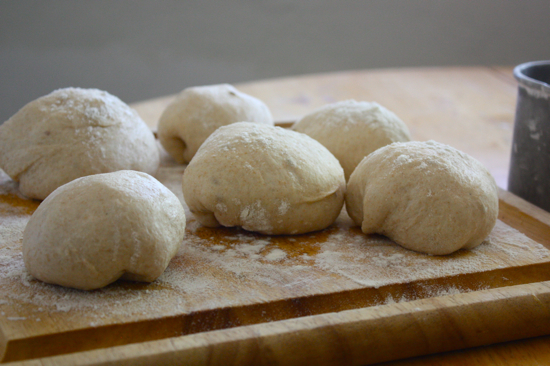 I have tried my hand at several different naan recipes. Most require a pizza stone and a really hot oven. Due to this unmistakable heat wave, I could not and would not turn on my oven. I vaguely remembered making a pan fried naan recipe once before, but could not find the recipe or anything close. So, I used a basic naan recipe, added a little baking powder and successfully cooked the dough in a hot cast iron pan. Of course, this recipe can also be made in the oven, if you are feeling bold. 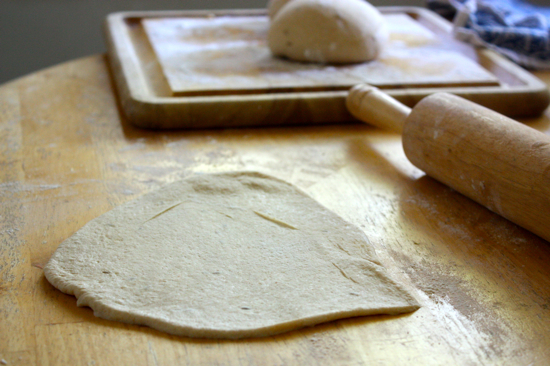 The key to a successful pan fried naan is to roll out the dough to the thickness of a tortilla. Any thicker, and the naan will likely blacken before it is completely cooked through. Because the dough is very flexible, I found it easy to stretch the dough in my hands like pizza dough. However, a rolling pin should do the trick as well. 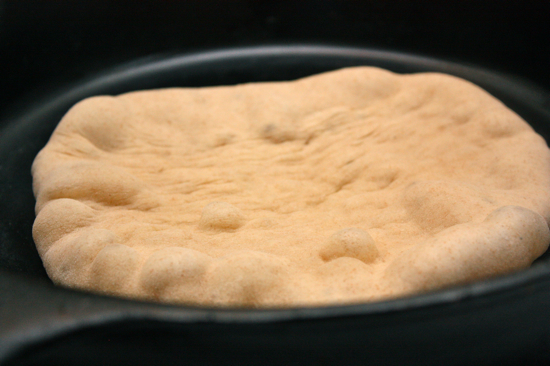 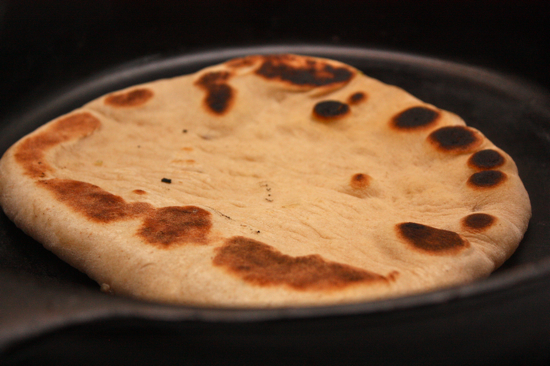 The original naan recipe calls for only 2 cups of flour. When I substituted 1/2 cup of that flour with whole wheat, the dough was too wet. I ended up slowly adding about 1/4 cup of white flour. If using only white flour, then reduce the flour to just 2 cups.

Also, I added the cumin seeds because it reminds me of the naan I often eat at Indian restaurants. Adding them is optional.


Dissolve the yeast in the warm water and let sit for about 5 minutes, or until foaming.

In a medium-sized bowl, mix the flours, salt, sugar, and baking powder until well mixed. Slowly add the oil and plain yogurt. The dough should be dry and a bit crumbly. Stir in the cumin seeds, if using.

Add the yeast water to the flour mixture. Stir with a wooden spoon until a wet dough forms. Turn out dough onto a floured work surface. Knead, adding a little flour as needed, until a smooth but still slightly wet dough forms, about 5 minutes.

Place the dough in a bowl with a drizzle of oil and toss around to coat. Lay a towel or plastic wrap over the bowl and let the dough rise until doubled, 1 1/2 to  2 hours.

Divide the dough into 6 pieces. Form each dough into a smooth ball. Let the dough balls rest for about 15 minutes on a lightly floured surface with a towel set over them.

Heat a large, dry cast iron pan on medium heat until hot. On a floured work surface, roll out one of the dough balls until it is the thickness of a tortilla. Set in the hot pan and cook for about 2 minutes, or until the surface is very bubbly. Flip and cook another 2 minutes, or until brown spots have formed. Set aside and brush with butter or ghee. Repeat until all dough balls are cooked.