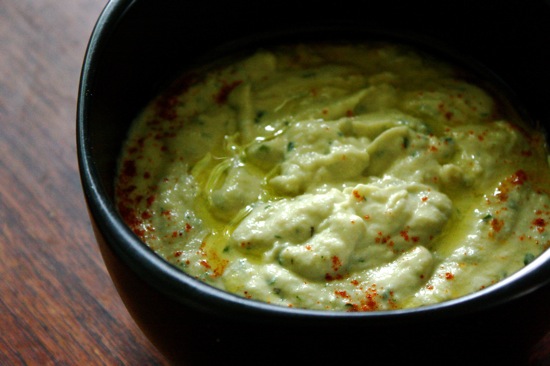 All right, summer is officially over. I will admit that I am ready for my season, but reluctant to see the steady flow of fresh produce disappear.   Already our zucchini plant, which was overwhelming us just a few weeks ago, is dead.  Thankfully, it did not disappoint us. Along with many rounds of grilled zucchini sandwiches, we made this Baba Ghanoush recipe a few times.  I really think it's better than the traditional eggplant dish because, as I've said before, zucchini is just more flavorful.  It makes for a great snack, it's very healthy, and it can be used pretty much whenever you'd use hummus.


P.S. As I have solemnly rejected eggplant, expect to see a Zucchini Parmesan post sometime soon. 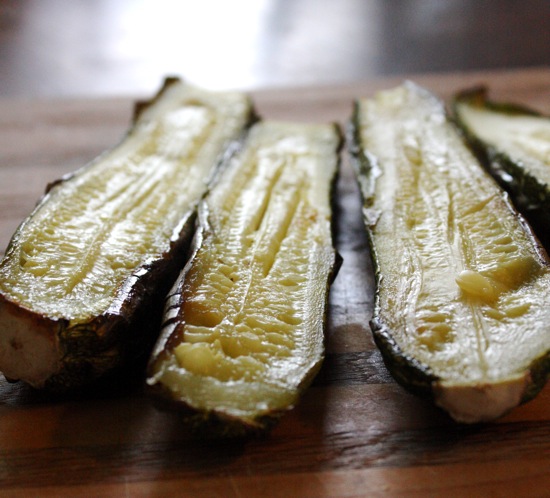 There is nothing too complicated about this recipe.  I took a basic Baba Ghanoush recipe from David Lebovitz, and substituted the eggplant for zukes. His recipe calls for blistering the zucchini skins under the broiler and than slowly roasting them in the oven.  The blistering makes the flesh of the zucchini easily fall off with a spoon, so don't skip that step.  However, I recommend grilling the zucchini as it will not only blister the zucchini but also give the dish a smoky flavor.

Set oven to broil and let heat up for a few minutes.  Otherwise, preheat grill on medium-high heat.


Place zucchini on a pan and place in oven under broiler.  Blacken skins, making sure to turn zucchini a few times so they are evenly blistered.  Switch the oven to 375 degrees and place zucchini on a lower rack.  Roast for 20-30 minutes or until zucchini is very soft when pushed with the back of a fork.  If grilling, cook zucchini for about 20 minutes on medium heat, turning a few times, until soft and skin is black.  Let zucchini cool. 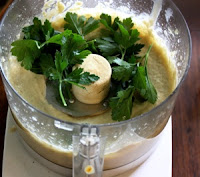 Cut each zucchini in half and scrape out the flesh into a food processor or blender.  Add all ingredients except for the parsley and paprika and blend until smooth.  Adjust seasonings and lemon juice according to taste.  Add parsley and pulse a few times.

Chill for a couple hours before serving.  Once chilled, drizzle with olive oil and sprinkle with paprika.  Serve with fresh bread, veggies or pita chips.